The battle of France is over. The battle of Britain is about to begin… The whole fury and might of the enemy must very soon be turned on us.            Winston Churchill, June 1940 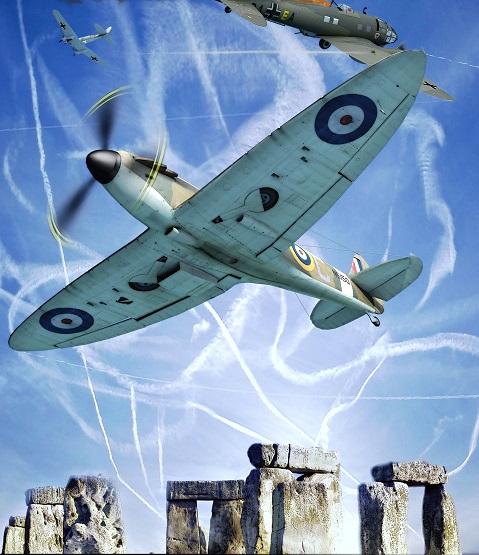 The ‘Battle of Britain’ was the 1940 defence of mainland Britain by the Royal Air Force, fought against the bombing campaign of the Luftwaffe (German Air Force) in the Second World War. Adolf Hitler fully intended to invade Britain in the summer of 1940; he believed the only obstacle to this would be the continued existence of the RAF, so he instructed the Luftwaffe to destroy the RAF’s planes and airbases. In the summer and autumn of 1940, Luftwaffe bombers repeatedly attacked targets on mainland Britain. RAF fighter squadrons attempted to destroy or disable the bombers before they reached their targets.

Before the Battle of Britain: Dunkirk

The Dunkirk evacuation – code-named Operation Dynamo – was the evacuation of Allied soldiers from Dunkirk, on the French coast, between 27 May and 4 June 1940. The Allied troops had been forced to retreat to Dunkirk by Nazi forces advancing through France. British ships crossed and re-crossed the Channel repeatedly to ferry them back to mainland United Kingdom. Many of the ships were not naval vessels but civilian volunteer craft, including fishing boats, lifeboats and yachts. Over 300 thousand troops were rescued. Although the evacuation was the result of a terrible defeat – Churchill called the events in France ‘a colossal military disaster’ – it came to be seen as a triumph of British courage and so in propaganda terms amounted to a great victory.

The End of Hitler’s Invasion Plans

By late September of 1940, Hitler had postponed his planned invasion of mainland Britain. His reasons are still debated; it is entirely possible that if the Battle of Britain had continued, the Allies would have been defeated, as they could not build planes or train pilots quickly enough to replace those they had lost. However, Hitler – possibly angered by the RAF’s bombing of Berlin – decided to concentrate bombing on civilian targets instead of RAF facilities. The bombing campaign known as the Blitz began in September 1940. Tens of thousands of civilians would lose their lives before the war ended. The RAF, however, was able to return to full strength and would make a major contribution to the Allies’ eventual victory in 1945.

Fighter Pilots of the Battle of Britain

Never in the field of human conflict has so much been owed by so many to so few.

The major burden of defence against the Luftwaffe fell on the pilots of the small fighter planes: mostly Spitfires or Hurricanes. Most of these men (women were not permitted to fly combat missions at this time) were under the age of thirty, some as young as 18. The majority were British, recruited from all parts of the UK, although a sizeable minority came from other countries. Polish pilots in particular made a great contribution to the Battle of Britain; others came from the Australia, Canada, the US, France, New Zealand, Czechoslovakia, South Africa, Jamaica, Palestine and other nations.

The human cost of the Battle was very high. Of the 2,936 aircrew who fought for the Allies, 544 were killed. Another 814 died before the end of the War.

Aircraft of the Battle of Britain

The Spitfire was the iconic aircraft of the Battle of Britain and became the symbol of British defiance in the air. Designed by Reginald Mitchell, it had an advanced all-metal airframe, making it light and strong. It took longer to build than the Hurricane and was less sturdy, but it was faster and had a responsiveness which impressed all who flew it. Crucially, it was a match for the Luftwaffe’s Messerschmitt Bf 109 and was superior to it at lower altitudes. The Spitfire entered service with No. 19 Squadron at Duxford in August 1938. Production was slow at first, but by September 1940 it was in service with 18 RAF squadrons. Spitfires shot down a total of 529 enemy aircraft, for a loss of 230 of their own.

The Hurricane was the most numerous of RAF Fighter Command’s aircraft during the Battle of Britain, equipping 33 squadrons by September 1940. Its traditional design – a wood and metal framework covered in fabric – was derived from earlier biplane fighters and was essentially out of date despite later improvements. However, it was a stable and rugged aircraft that could be maintained and repaired more easily than the Spitfire. Its limitations meant that, where possible, Hurricane squadrons were directed against enemy bombers while the superior Spitfires dealt with the fighter escorts. Despite its shortcomings, the Hurricane accounted for 656 German aircraft during the Battle of Britain – more than the Spitfire. Between 30 July and 16 September, 404 Hurricanes were destroyed.

The Bf 109 was arguably the best fighter in the world in 1940. It was faster than the Spitfire at high altitude, could dive more rapidly and carried a more effective armament of two cannon and two machine guns. Most Bf 109 pilots had more combat experience than their RAF counterparts, at least at first, which also conferred a major advantage. However, the Messerschmitt did not have the range to fly beyond London and carried only seven seconds worth of cannon ammunition, which limited its operational usefulness. The Luftwaffe started the Battle with about 1,100 Bf 109s and 906 pilots available. Some 650 aircraft were shot down.

The Dornier Do 17 – nicknamed the ‘Flying Pencil’ – was based on a pre-war design for a high speed mail plane, which was converted into a bomber by the Nazi air ministry. The Do 17Z became the main production version, equipping three Luftwaffe bomber wings at the height of the Battle of Britain. The aircraft was already virtually obsolete. It was nimble at low altitude but could only carry 1,000 kg of bombs and had a limited range. Like the Heinkel He 111, its defensive armament was weak and losses were severe. In a famous action on 18th of August, eight Dorniers were shot down and nine damaged in attacks on RAF Kenley, to the south of London. Dornier Do 17 production was terminated in the summer of 1940.

The Heinkel He 111 was the most important of the Luftwaffe’s early bombers, but was obsolescent by 1940. Its bomb load of 2,000 kg was insufficient for a strategic bombing campaign and it was slow and poorly armed. Measures to increase its defensive armament proved ineffective and the Heinkel, like other German bomber types, was acutely vulnerable to RAF fighter opposition. In its favour was a structural strength that could soak up punishment – many aircraft managed to return to base with hundreds of bullet holes in their fuselage and flying surfaces.

The infamous ‘Stuka’ achieved notoriety during the Blitzkrieg triumphs of 1939-1940. Its name derived from an abbreviation of the German term for dive bomber – Sturzkampffleugzeug. The Ju 87 was the chosen weapon of the Luftwaffe High Command, designed to deliver pin-point bombing attacks in a near vertical dive. It was effective during the campaigns in Poland and France, when German forces operated largely in an environment of air superiority. But in the skies over Britain the story was very different. After some initial successes by heavily escorted formations, the Stukas were slaughtered by RAF fighters. On their worst day, 18 August, 12 Ju 87s were shot down and many others damaged or written off in crashes on their return. Such losses meant the aircraft was gradually withdrawn from the battle.

The Junkers Ju 88 was the most modern of Germany’s bombers in 1940. It was designed as a fast medium bomber and first flew in December 1936. However, the promising new design was compromised by Ernst Udet, deputy to the Luftwaffe’s Commander-in-Chief Hermann Göring. Udet demanded that the Ju 88 be capable of dive-bombing. The necessary structural changes increased the aircraft’s weight, which reduced its performance and also delayed production. It proved just as vulnerable to RAF fighters as other Luftwaffe bombers during the Battle of Britain, but later matured into one of the most versatile and important of the Luftwaffe’s aircraft.

For more information see 9 Iconic Aircraft from the Battle of Britain .