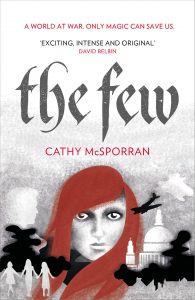 The Few by Cathy McSporran

It’s a little known fact (and new to me) that Winston Churchill was a bit of an occultist who consulted mediums and considered himself psychic. His belief in witches – and the rumour that he consulted them during the war – was the spark for Cathy McSporran’s first Young Adult novel, The Few.

Maggie, the heroine of the story, is working with the Women’s Land Army in the south of England – not just to help with the war effort, but to help her deal with her grief: Maggie and her younger brother witnessed their father’s death at Dunkirk, in an incident that also uncovered the pair’s latent supernatural talents. Maggie and Colin are soon recruited into a coven of young witches working for the British government; taken to London, they discover that their most dangerous enemies are a group of German teenagers with powers that mirror their own. These Gothi become even more lethal when one of their number succeeds in channelling the ancient Aryan goddess Freya.

Much of the story takes place under the (sometimes literal) shadow of the Battle of Britain, so the supernatural storyline is complemented by some thrilling air battles, as well as a touching romance between Maggie and one of the Spitfire pilots, Michal.

McSporran effectively weaves together history, real and fictional characters, and the mythologies of Northern Europe to create a spellbinding story that rarely lets up its pace. The tangled web of relationships – encompassing betrayal as well as fierce loyalty and dedication – feels real, and packs a considerable emotional punch by the conclusion. The Few is the first book in a series, and succeeds in giving the reader both a satisfying ending and an enticing hint of more adventures to come.

It can be a tough call to blend real history with mythic fantasy, but McSporran pulls it off with flair. The book itself isn’t well served by its cover, but if you look beyond that you’ll find a ripping fantasy that combines high-stakes world peril with emotional strength and subtlety.

‘A ripping WW2 fantasy that combines high-stakes world peril with emotional strength and subtlety. I loved it.’ Gillian Philip, author of Bad Faith and the Rebel Angels series

‘Cathy McSporran’s second novel The Few takes as its premise the story that Winston Churchill is said to have employed witches in his fight against the Nazis, and creates from that a gripping wartime tale which is less about arms and stratecy, and more covens and magic.’ Herald