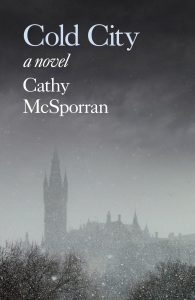 Susan Pherson sees her dead father on the street in Glasgow.  After taking an overdose she’s committed to a psychiatric institution.  Given a cocktail of drugs, she finds herself between the reality of hospital and an alternate city permanently covered in snow and ice.

Susan’s gay brother, Jamie, is now married to Katie.  The country is dominated by militant pagan groups and Christian fundamentalists, led by the charismatic McLean.  As Susan is drawn into the struggles of this parallel world, her grip on her ‘first world’ loosens.

But who is Raj, the mysterious man who creates paintings of wolves and Norse legends, and what are his intentions?  What will happen when her brother is unmasked as a homosexual?  What is McLean’s real agenda?  Can Susan resolve the crises in the ice-bound city in order to return to reality?